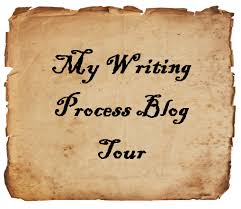 I was invited to participate in this blog tour by Clara Grace Waker, who posted last week on her awesome blog, Creative Juices: http://www.claragracewalker.blogspot.com/

I’ll be answering the following four questions about my writing process despite my immediate reluctance to talk about what I’m currently working on, because I think it’s important for writers to learn how to talk about their work and their process. I have been trying harder to force myself to talk about my work with others, because I think it helps me learn and grow.  I am not yet published, but I’m currently working on my 5th novel and intend to get there one day.
1) What am I working on?
I have five chapters left to write in a YA Space Fantasy/Sci-Fi combo that is turning out to be very eclectic and challenging.  I threw the rules of grammar out the window, which almost killed me at first, but strangely enough, I believe it has improved my writing overall and helped me find more voice.
The novel is in first person, present tense, with two, alternating POVs, both male. My secondary goal for this adventure story is that it will become an epic bromance.

The first MC, Ryban, is a bit rough around the edges with a sparse voice that breaks the rules of grammar. The second MC, Aven is much more internal, sensitive, anxiety-ridden, and that reflects in his voice which occasionally becomes overwhelmed with stream-of-conscious. This is in part due to the fact that his character is made mute by the bond, which has provided interesting challenges in narration.

It’s kind of a complicated story, and I’m struggling to accurately describe and explain it at the moment, which is why I’m not sure if it will ever go out to any beta readers. It might have just been a writing experiment for myself. Here’s the original, confusing, atrocious log line from my first outline:

On the eve of war, two bloodbound half-breed teenage guys, and four other outcasts, take an inter-planetary trip from the crater slums of Thipro to the all female planet of Lokwee, in the Emperor’s own stolen spacecraft in an attempt to flee persecution and rescue their Neffela fathers and half-breed brothers from their Mokree warrior mothers.

Say that again? 😉  I guess could say that it’s a touch of Firefly meets a two boys version of Graceling, with an Amazon Warrior-like culture on the side and some LGBT themes for good measure. Still confused? It took me some time to wrap my mind around it all as well. . . 🙂

2) How does my work differ from others of its genre?
In this novel, I have two same sex POVs, which is a bit rare. Also, it’s typical in YA for dual POV characters to be love interests, and mine are not. Technically, they were destined (by their blood bond) to be love interests, but destiny and reality are two very different things. This creates sort of a backwards closet situation, where my straight boy is the one who is considered to be choosing a path that is not what people wanted and expected of him.

While I intended for this to have a definitely Sci-Fi feel to it, there has been so much world building to do that has grounded it more as space fantasy.  Also, while it is conflict and adventure driven, there’s a lot of focus on the unique relationships that exist and grow between the six teens.

3) Why do I write what I do?
Because the ideas speak to me, and I have to see them through. While I’ve stuck with the category of YA, I have written in three different genres so far, two that I never expected to write in. I try not to put rules and restrictions on myself or my ideas. I want to write the ideas that sneak inside me, grab a piece of my heart, and won’t let me go, no matter what the genre is, who the characters are, or how the story is going to turn out in the end. I write what I do, because I have to. I need to. I want to.  Perhaps a Space Fantasy/Sci-Fi wasn’t what I originally thought I would write, but I don’t care. I can’t change that and wouldn’t even want to. At best, it could become an amazing story. At worst, it will become an excellent learning experience.
4) How does my writing process work
It’s different for every single story and novel. I am a bit of a half planner, half pantser though.  With the current novel, I have a blank sketchbook that I’ve filled with ideas, thoughts, info on characters, made up words, etc.  For about a month, all I did was daydream about this world, take notes, write down ideas. Then I started to form the ideas into a plan. I did write a very vague outline to help get myself started. It is the kind of outline where under each chapter there might only be a couple of phrases or sentences, an emotion, a major event. It’s very short and sparse and would not make sense to anyone but me, but it helped remind me of where I wanted to start, what big things needed to happen in the middle, and how I wanted to end the novel.

Once I started writing, the outline had been modified repeatedly and thrown out the window completely by chapter 12.  Now, I keep working towards those defining moments, but the paths I’m taking to get there are not what I had originally thought or expected.  When I finish the first draft, I plan to do a read through and full edit, followed by some major revising and rewriting.  Then after I get the bulk of the story under control, I’ll split the novel into half by POVs and read the novel only through one POV at a time, to ensure that I’ve stayed true to the style and voice of each MC. After that, I will probably put it through one more read through and edit before deciding whether or not to share it out with beta readers.


In previous novels, I’ve had outlines, used a post-it notes method for one with a lot of alternating scenes, and completely pantsed one novel. I guess that I haven’t found any one method that I’m willing to stick to yet. I do what feels right for each novel, and perhaps with more time, I’ll find a method that is a bit more consistent. If not, oh well. I don’t believe in fighting against what seems to be working with any given novel, just to keep things uniform. I like to be flexible and try new approaches.

Check out the next 3 writers on the blog tour who will be posting answers to all 4 questions on June 16th at the links below:
Kelley Harvey: www.kelleyharvey.com
Kelley is a girl, a wife, and an animal lover. She’s also the mother of two teen girls; therefore she resides on and desperately needs a vacation to Adult Sans Kids Resort—all inclusive, off course. Her passion is writing. Her YA Romantic Soft Sci-Fi, is titled DEVASTATION. SECRETS I KEEP, a NA Contemporary Romance, is her latest novel. Feel free to check them out on her site!

Ellen Mandeville: http://ellenmandeville.com/
Ellen grew up in Southern California having no clue what she wanted to do when she became an adult. Learning that degrees are awarded for reading books and writing papers, she earned a B.A. in English Literature from UC Santa Cruz. A few years later, she and her husband sailed across the South Pacific to New Zealand. They now reside in Idaho with their two children. Ellen currently impersonates being a responsible adult.

Ami Allen-Vath is a Young Adult Contemporary author, represented by Victoria Lowes of The Bent Agency. She lives along the shores of New Jersey with her husband, two children, and a dog named Yoda. She loves books that make her laugh and/or want to “fall” off a bridge. She does not like birds, cilantro, or cartoon character impressions. She can be found on Twitter: @amilouiseallen, Facebook, and her blog:“Ami with an I.”

Ami previously participated in this blog tour, so you can already read her post here: http://amiallenvath.wordpress.com/2014/04/05/what-is-my-writing-process-blog-hop-stop/

B.A. Wilson lives in Missouri and works as a Public Library Services Consultant. She has 4 library cards, fosters a serious One-Click addiction, and is cultivating a new infatuation with all things Audible. At any given moment, she is most likely reading 5 different novels, in at least 3 different formats. Wilson earned her Bachelor of Arts in Music & Tourism, and received a Masters of Science in Library Science and Information Services. This delightful combination of degrees qualified her to spend most of the past decade dissecting love triangles with library patrons and discussing the post-apocalypse with middle school kids, while mentally soundtracking her favorite novels. Wilson enjoys reading and writing YA novels, consuming caffeinated beverages, and spending too much time on Twitter and Instagram.

The Ruby Circle
by Richelle Mead

Love Letters to the Dead
by Ava Dellaira

The Miseducation of Cameron Post
by Emily M. Danforth

All the Bright Places
by Jennifer Niven

Life of Pi
by Yann Martel